The department is committed to contributing actively to the intellectual life on campus and in the community.

We, faculty members in the UCSB Department of Germanic and Slavic Studies, stand with our university’s graduate students—and with graduate students, graduate researchers, and postdoctoral researchers across the University of California system—in their efforts to obtain a fair living wage. Graduate students play an essential role in the workings of the university and we value and appreciate the excellent work they perform. A fair wage is essential to drawing a robust, diverse group of graduate students that will ensure the future of our profession.

We call on the University of California to bargain in good faith and to increase graduate student salaries in a manner that addresses the significant economic burdens that our students face while living in one of the most expensive areas in the nation. By addressing the students’ legitimate demands, the university can avoid disruption to our core mission.

We recognize that academic workers in UAW 2865, UAW 5810, and SRU-UAW have a legal right to participate in strike actions and we call on the University of California to refrain from any form of retaliation against legitimate strike activity. We urge the university to swiftly come to an agreement where everyone’s needs can be met.

New Offering: German 1 is being offered in Winter 2023

We encourage students interested to begin their studies of German to sign up for German 1, which is now being offered in Winter 2023.

Statement about Russia's Invasion of Ukraine

As a Department of Germanic and Slavic Studies and Program in Russian and Eastern European Studies, we unequivocally condemn Vladimir Putin’s brutal attack on Ukraine, a sovereign country. This unprovoked act of aggression violates international law, jeopardizes the security and livelihood of millions of people in the region and beyond, and risks plunging the post-Soviet region, and with it the entire world, into a global crisis. We stand with the Ukrainian people and offer our support to all those in Russia, Ukraine, and beyond who oppose this senseless war. We express our solidarity with the citizens of neighboring states – Belarus, Poland, Moldova, the Baltic, Central Asia, and the Caucasus – who stand for peace, freedom, and the right to resist tyranny and domination by any world power. We firmly support the right of the people to determine their own destiny.

We stand in solidarity with our students from the region who are devastated by these events and are ready to support them.

"The Code of Presence: Protest Embroideries and Digital Media from Belarus"

"That We Have Never Been: Telling the GDR Differently"

Co-sponsored by the Department of Germanic and Slavic Studies and the Graduate Center for Literary Research.

Ukrainian Psyanky for Peace: A Cultural Arts Demo and Fundraiser

Wednesday, May 25, 2022, 5:15pm: A Cultural Arts Demo and Fundraiser for Ukraine with Artists Beth Ostapiuk and Donna Nance. MCC Lounge.

"Gabriele Stötzer: The Collective as Liberation"

Friday, April 22, 2022, 10:00am: A Lecture by Elske Rosenfeld via Zoom as part of the Sponsored Lecture Series: "New Approaches to Art in the German Democratic Republic" organized by Sven Spieker (UCSB) and Matteo Bertele (Ca' Foscari University, Venice)

Co-sponsored by the Department of Germanic and Slavic Studies and the Graduate Center for Literary Research at the University of California, Santa Barbara

Co-sponsored by the Department of Germanic and Slavic Studies and the Graduate Center for Literary Research at the University of California, Santa Barbara.

"From Alphabetical to Digital Literacy? Some reflections on orality, writing, cultural techniques and digitality"

Co-sponsored by the Department of Germanic and Slavic Studies, Transcriptions, Interdisciplinary Humanities Center, Comparative Literature Program, and the Graduate Center for Literary Research (GCLR). The Max Kade Visiting Professorship is made possible by the support of the Max Kade Foundation and Humanities and Fine Arts at UC Santa Barbara.
Event Details

Cosponsored by the University of California Office of the President Multi-campus Research Programs and Initiative Funding, the UC Humanities Research Institute, the Interdisciplinary Humanities Center, and the Department of Germanic and Slavic Studies.

"Fallout: Chernobyl and the Ecology of Disaster"

Cosponsored by the Carsey-Wolf Center and the Conference "Fallout: Chernobyl and the Ecology of Disaster," sponsored by the College of Letters and Science and the T.A. Barron Environmental Fund, the Department of Germanic and Slavic Studies and the Graduate Center for Literary Research, as well as the Interdisciplinary Humanities Center, Global Studies, Comparative Literature Program, Environmental Studies, Cold War Studies, College of Creative Studies, and History Department.

In memory of Professor Emeritus Don Barton Johnson, the Department of Germanic and Slavic Studies held a virtual commemoration of Don's life and work.

Obituaries collected in The Nabokovian by the International Vladimir Nabokov Society are available here. 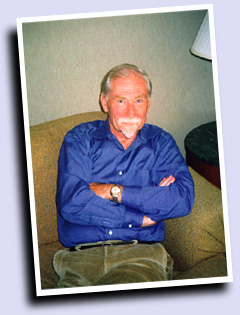 Don passed away peacefully at Villa Alamar in Santa Barbara on Tuesday, August 25, 2020, after having been in declining health for some time. Don is survived by his widow Sheila Johnson, and also by his stepdaughter Jessica Dora and his stepson Aaron Moody, his wife Rebecca Vidra, and their three daughters Lili, Chloe, and Véla.

Don did significant work within Slavic Studies, ranging from linguistics to literary studies, and was a figure of great stature within research communities devoted to the study of Russian writers Vladimir Nabokov and Sasha Sokolov. He was the author of several books, including Transformations and their Use in the Resolution of Syntactic Homomorphy (Mouton, 1970), the groundbreaking study Worlds in Regression: Some Novels of Vladimir Nabokov (Ardis, 1985), and, with Gerald de Vries, Vladimir Nabokov and the Art of Painting (Amsterdam UP, 2006), as well as numerous chapters and articles on Nabokov and Sokolov.

Don played an early and leading role in Nabokov studies and served twice as the president of the International Vladimir Nabokov Society. He also created NABOKV-L, an electronic Nabokov discussion forum based at the University of California, Santa Barbara, which he launched in 1993, the same year he founded the annual print journal Nabokov Studies, which now awards the Donald Barton Johnson Prize for the best essay in Nabokov studies. In addition to Nabokov studies, Johnson was influential in his research on Sokolov. He compiled many biographical materials and conducted interviews with Sasha Sokolov.

Thanks to Don and his scholarly generosity, the University of California at Santa Barbara has extensive archival and research materials related to Vladimir Nabokov and Sasha Sokolov at Davidson Library and Special Research Collections, including the Donald Barton Johnson Papers, based on his own personal archive. In February of 2016, the Department of Germanic and Slavic Studies at the University of California, Santa Barbara hosted a symposium, exhibit, and performance devoted to the work of Vladimir Nabokov in Don’s honor. The Department of Germanic and Slavic Studies will continue to honor Don’s memory with the D. Barton Johnson Award, which awards the best critical scholarly essay by a student on Russian, East European, or Eurasian literature, art, and culture by a UCSB student, and was founded in 2017 with a gift from an anonymous donor.

Don will be remembered for his rigorous and insightful scholarship, whose meticulousness and ingenuity evoke both his work as a cryptographer during wartime, and deep linguistic expertise, as well as for his clever stories, wit, and enthusiasm for birdwatching in Santa Barbara and hiking near his home in Mission Canyon. We will miss him dearly.

Congratulations to all of the recipients of Certificates of Excellence and our highest awards and distinctions! 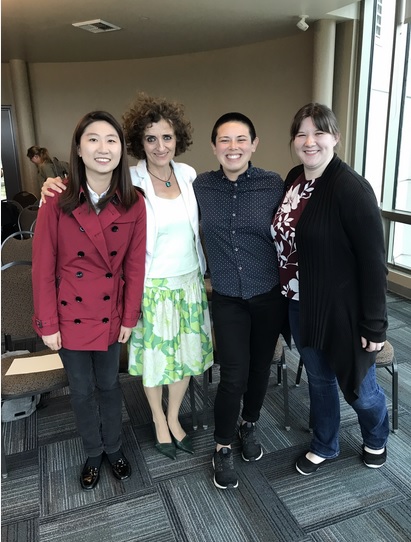 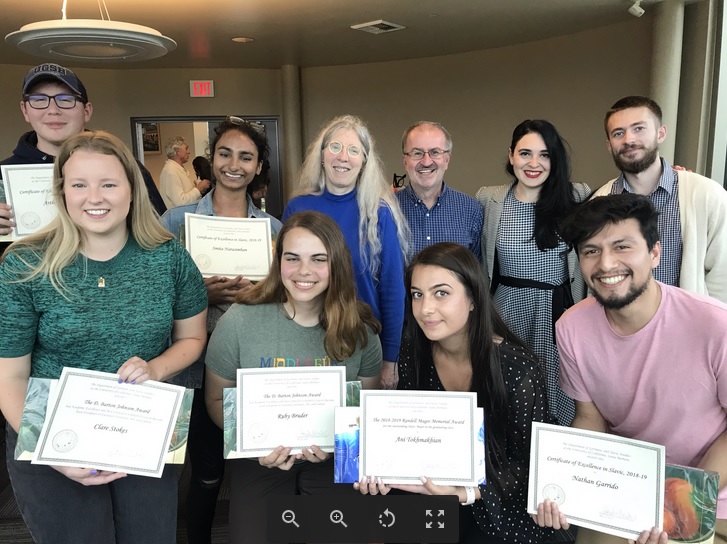 Focus on Faculty: Dr. Susan Derwin on her writing workshop for veterans

"The Healing Power of Storytelling: from the Holocaust to recent American military deployments" by Maya Chiodo (November 2018)

Read the interview with Dr. Susan Derwin (a specialist on trauma studies and a professor in UC Santa Barbara’s Comparative Literature and Germanic and Slavic Studies departments)

"Radio and Environments. From Hörspiel to Radio Art"

Film Screening and Discussion: "Images of the World and Inscription of War"

Monday, March 4, 2019, 7pm, HSSB 1173. The film will be introduced by Visiting Kade Professor, Dr. Ute Holl, who will also moderate the post-screening discussion.

This event is presented by the Department of Germanic and Slavic Studies and the UC Santa Barbara Memory Studies Reading Group.

A Day Commemorating the Life and Work of Professor Ursula Mahlendorf

This event is presented by the Department of Germanic and Slavic Studies and co-sponsored by the College of Letters and Science, the Departments of Sociology and Feminist Studies, and the Comparative Literature Program.

The event is free, but a reservation is recommended to guarantee a seat.

"Beyond Praries and Skyscrapers? Austrian travelogues of the inter-war era on the U.S."

"Jackals and Arabs (Once More: The German-Jewish Dialogue)"

"Rebranding Sovereignty in the Age of Trump"

"School discipline inside and out: the limits of Soviet school's disciplinary authorities"

"Heidegger, Nazism, and the Jewish Other"

"Hannah Arendt, On truth and lying in politics"

The seminar began with a short presentation by Dr. Lüdemann, after which the following texts by Hannah Arendt were discussed:

"Translating the Russian Classics in the Twenty-First Century"

"What is "Modern Technics"?

For the video of Bernard Stiegler's talk, click here:

(Please note: The audio of the introduction is poor, but Stiegler's talk is loud and clear.)

"Dialectics of a Constellation: Heinrich Heine in Critical Theory"

Past Conferences and Symposia:

You can see the symposium poster here.

On the occasion of the 100th anniversary of the publication of Franz Kafka’s famous text “The metamorphosis,” an interdisciplinary conference at UCSB brought together a wide array of scholars and artists to discuss Kafka’s text in its literary-historical context, and to read it as an exploration of metamorphoses that problematize borders between species and between living organisms and machines.

Statement about Russia's Invasion of Ukraine